It’s that time of year again when churches around the country hold Vacation Bible Schools in various formats. For a week or more the church is turned into a biblical marketplace or an underwater reef or a host of other locales to combine Scripture, music, crafts, and games to communicate the Gospel to children and others.

But where did this tradition begin? It seems that the first recorded summer Bible school in the United States was instituted by Mrs. Walker Aylette Hawes in 1898 in conjunction with Epiphany Baptist Church on New York City’s east side. Mrs. Hawes noticed how many immigrant children were roaming the streets in the summer, so she searched for a rented facility where she could begin a six-week summer school. The only available facility was a saloon and thus VBS was born in a bar. The schools proved to be popular and expanded to seven by the time of her retirement in 1901.

The Baptist Missionary Society under the leadership of Dr. Robert Boville picked up the work and by 1903, there were seventeen such schools. The movement grew until he founded the Daily Vacation Bible School Association in 1911 and by 1927, it had become an international movement. There were guidebooks for teachers and administrators giving advice on everything from teaching games to managing finances.

As publishers saw the potential for marketing curriculum resources for this movement, they realized what a goldmine this could be, since churches would want to purchase new resources each year. The themes and packaging became and continues to be ever more elaborate. I wonder sometimes whether the message of God’s love and sacrifice gets lost in the exotic locales each year.

The most important part of a quality VBS program is not the T-shirts or the crafts or catchy skits that open the day. It is the relationships that are formed with the leaders, peers, and with God. Putting our time in the training and nurture of the staff of VBS is more critical than finding inflatable palm trees or the right banner to hang out front. 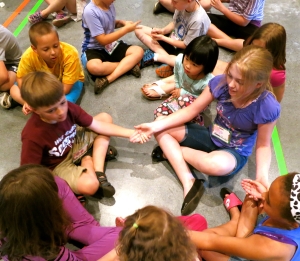 To that end Hope4CE Facebook group member, Roberta L’Esperance Schlechter, is sharing with us some of the files that she has used to help VBS leaders/teachers to know their role and the importance of the week. Roberta, Director of Children and Family Ministries at East Woods Presbyterian Church, uses youth as part of her leadership team. So the first file is a letter directed to them that helps explain the difference between youth group and their role as shepherds of children at VBS. The second file is a chart of the expectations of all shepherds throughout the different portions of the day.

May your VBS be a blessing if it is yet to be or may you think deeply about the meaning of this institution if yours has already come and gone this year!

One thought on “Vacation Bible School-Yesterday and Today”